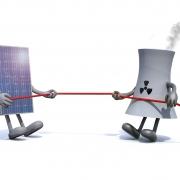 It is fairly common in buildings today to forgo the fireplace and chimney all together.  Modern heating and air conditioning technology fill the void of heating a room.  If installed at all, a fireplace and chimney are put in place for aesthetic reasons.  But in the commercial building world, the chimney could be making a comeback via the solar chimney.

During a Sustainable Architecture panel, Ken Lewis, President and Sustainability Leader at architecture firm AC Martin, described the solar chimney as part of a strategy to design a more sustainable office building.  The panel was part of the SET Series, a set (pun not intended) of monthly events leading up to the SET 2011 Exhibition and Conference on March 31-April 1, 2011.  SET stands for Sustainable Environment Technologies.

When we think of chimneys we usually think the output is smoke.  Put some logs in the fireplace, light a fire, and viola, we not only get heat for the room, but carbon filled smoke through the chimney.  Suffice it to say, not too sustainable.

The Solar Chimney of Today and Tomorrow Rather than heating a room, the solar chimney is intended to ventilate air from a commercial building.  The solar chimney works in similar fashion as a traditional chimney, but rather than outputting smoke, it outputs air, clean air.

The solar chimney is made of black painted concrete, with a layer of glass.  Passive heat from the sun heats the concrete on the solar chimney, thus heating the air inside the chimney to about 120-140 degrees.  As we learned in our science classes, hot air rises.

All this is done with little to no mechanical assist.  Just the laws of physics and a clever sustainable design.  Interestingly enough, this works at night as well, even without the sun.  The concrete is a good store of heat, and continually releases heat throughout the night to keep the flow of air through the solar chimney.

While it is a clever sustainable design, there still needs to be a redundant mechanical heating, ventilation, and air conditioning systems put in to account for the hottest days of the year.

Furthermore, the solar chimney will only work if the rest of the building is designed accordingly.  A building made with glass windows in the direct path of the sun with no shade probably would not be a candidate for a solar chimney.  A building taking into account orientation to the sun, water and energy inputs and outputs, may be suited.

Overall, the solar chimney is a great thing to consider when creating a sustainable building.  Perhaps these ideas will be implemented beyond commercial, office, and academic buildings, into our homes.