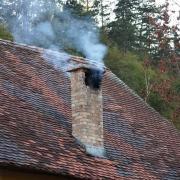 Chimneys in houses built many decades ago were built with different requirements than today’s, which sometimes means that safety is a concern. Any chimneys built prior to the 1950s were almost certainly masonry or block chimneys. The most common problem with old houses is that the chimneys aren’t lined, since that wasn’t a requirement when the fireplace was built. There are other issues to be on the lookout for, as well.

Many people who have old homes and unlined chimneys simply don’t realize how important a chimney liner is. The following are some of the reasons to have a chimney liner installed before using a fireplace:

Bricks that were made in the 1600s and 1700s were of a much better quality than today’s bricks, chiefly because of the method used for firing them. In spite of their incredible durability, there comes a time with every chimney when the mortar wears out. If the damaged mortar in a chimney is not replaced, the chimney will begin to lean and will ultimately collapse. Fortunately, there is a procedure called “tuck-pointing” which makes it possible to simply remove old mortar and replace it with new. No tearing down or rebuilding is required, if you catch the problem in time. Tuck-pointing will restore the original shape of the chimney and strengthen the entire structure giving it a fresh look.

When mortar deteriorates, the chimney structure becomes much more vulnerable to moisture damage that can create the need for many different types of costly repair.

In decades past, clearance between the fireplace and chimney and combustibles was not a safety consideration. It has been found that it can take many years for pyrolysis to occur. After wood beams have been exposed to the heat from a fireplace for even 50 years or more, they will suddenly ignite because of the process of pyrolysis. The process causes the wood to be highly combustible. If you can see wood that is directly against chimney masonry, it’s very possible that pyrolysis is occurring. It’s best to have a chimney professional assess the potential danger of your fireplace before using it again.

Old homes and fireplaces are beautiful, but the chimneys are not always safe to use. Contact a chimney professional today for an annual chimney inspection, installation of a chimney liner, and help with any questions you may have about the safety of your fireplace and chimney.

Painting Metal with an Air Gun

Tips for Detecting Water Leaks
Scroll to top
During COVID-19, we are committed to your family’s home and health safety. We are still offering services while adhering to the highest safety standards. During this time, we are taking appointments for outdoor and indoor projects. Our professionals work hard to ensure your family’s safety during this challenging time.
Holler Box