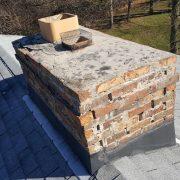 It is not uncommon for brick chimneys to crumble with age. Chimneys are often positioned in exposed areas of the roof, and crumbling can occur due to weathering even if other brickwork around your home is in good condition. In most cases, a crumbling chimney means the mortar between the bricks has degraded, the bricks have cracked, or both. Repairing a chimney that has started to crumble is a task most homeowners can do themselves. Often it requires you to repoint the mortar and replace any damaged bricks.

Removing Paint Rust From a Car

Home Insurance Coverage for Technology
Scroll to top
During COVID-19, we are committed to your family’s home and health safety. We are still offering services while adhering to the highest safety standards. During this time, we are taking appointments for outdoor and indoor projects. Our professionals work hard to ensure your family’s safety during this challenging time.
Holler Box