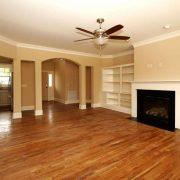 It was a summer night where I was home alone once again. I struggled to find something to occupy my attention, but the rain outside had not ceased for 3 days straight. In a gaming mood, I tiptoed down the stairs and walked contentedly towards the gaming room. Looking for my favorite game, I walked over to the storage corner, where I noticed a wet spot on the carpet. Initially I thought it had been my dog Bo at it again, but then I noticed that all along the walls of the basement, the carpet flooring was wet. Feeling a bit concerned, I wandered into the second basement area where the basement was not finished. Over the past three days, water had somehow managed to find its way into our house. Everything—ranging from paintings to boxes, had been completely drenched. No one was home, so I panicked as to what I should do. I went to grab the carpet cleaner which had a water suction feature and noticed that there were tiny black dots speckled all over the walls. So this is the extent of having a home in New Jersey? Why would the water be getting in and what could I do to prevent this? After doing some research I learned of things that cause, stop and prevent leaking. I’d be happy to share this with others as it has prevented my parents from ripping their hair out over water damage.

When it comes to water damage and leakage into your basement, there can only be so many causes. Some of the most common ones are water mitigating through concrete, excess humidity (thus causing condensation), ground water, a clogged or incorrectly installed gutter system, cracks in the foundation and bad insulation. Concrete is actually a porous material, meaning that it can easily absorb or have water go through it. Water may be flooding at the base or below the basement and slowly seeping into your basement over time, while humidity from daily household activities (showering, cooking and heating) can easily build-up over time and go to the coolest part of your house (your basement.) Ground water can seep into your foundation and cracks in the foundation will lead to water leaking in at the base. With a gutter that is clogged or improperly installed, the water may be directed towards your house instead of away. Let’s say that your home’s backyard lacks a slope from where the gutter ends, then the water will usually flow back into the base of your house and in through the walls. Bad insulation is also a common cause in basement humidity as moisture is directed towards the coolest part of the house. Then there’s the case of when you have heat being released to the attic after it is generated in the house, then you are more likely to have a high amount of moisture in your basement, leaving you with an environment suitable for mold to grow and fester in. The problem with our house was the angle that it was on. The water was actually flowing towards the basement instead of away, thus causing the leak in the first and second basements. One has many options to stop and prevent the causes of water leakage into your basement.

If you are seeking for some ways to stop and prevent leaking, then look no further. As mentioned earlier, flooding and leakage can be caused by incorrect gutter installation. A gutter extension can be installed at the end of the gutter, in addition with a angled slope to direct the runoff even more. This will give your gutter the boost it needs and the length (at least 4-5 feet away from your house) to divert the water to a different area. However, a downspout that is too short is not always the case. Your gutter may be clogged and full of debris, making the rainwater overflow in a certain area.  A clogged gutter can be easily fixed with a gutter cleaning and mesh barrier installed on the top to prevent debris/leaves from getting in. Next, plugging the gaps (if any) in walls is a good practice. Doing so will prevent water from dribbling into your basement. Hydraulic cement is use in most cases and costs less than $20. Keep in mind that the plug-in trick is only good if the water is coming in from a higher point of the wall and not lower. A lower leakage is just from groundwater and a plug won’t solve the problem. After you’ve attempted these two or have assessed the actual problem, perhaps it may be the fact that you have to restore the crown—the soil underneath your house that slopes a minimum of 6 inches over 10 feet in any and all directions. The common enemy of this structure is time, causing erosion around the foundation as the dirt lessens and settles. One can simply rebuild this part of the house with dirt and a shovel. There is a more costly way that uses clay, but it costs around $30 and should cover the perimeter of your house.

Aside from all the replacing of systems and rebuilding of bases, one should consider the need to rebuild the landscape as well. You’ll want to make sure that the water is going away from the house and that the crown is far away so as to not rot the wood of your house.  If your basement does not have any foot drains, you can always go with the alternative of installing a curtain drain to divert any water that travels underground and eventually leaks into your house. This is the solution that my father went with and it is known as a French drain. The overall purpose of the French drain is to provide a shallow trench in which the water flows into. Gravel and piping are included in this process and will help to divert the water away. This method is inexpensive and will cost $9 to $17 per linear foot. So you’ve tried all of the above methods, but have not gotten any results? That means the best option is that you’ll just have to pump it. That’s right; your basement will have to channel the water from the inside. An interior draining system solves the leakage problem in most cases, but costs about $3,000 to install. The main function of the interior draining system consists of a channel around the perimeter of the floor where pipe is installed to connect to a collection tank at the lowest spot of the basement. The water is then transferred to a sump pump which will shoot the water outside of the house.  It may seem a bit costly, but it is one of the best options for an unfinished basement or for a basement that is underground. In the end, waterproofing your basement is often the best choice, but also the most expensive, weighing in at about $20,000 per treatment. You can perform moisture, mold and leakage tests to various parts of your basement, as well as have someone inspect what could be causing your leakage problem. I hope this helped as I have dealt with a soggy basement on more than one occasion.

Proper Insulation; A Great Way to Save Money